India is the second-largest cement supplier and producer, contributing 7 percent of the global capacity. According to the data published by the Department for Promotion of Industry and Internal Trade (DPIIT), cement and gypsum together drove a Foreign Direct Investment (FDI) of INR 394.53 crore between April 2000 and June 2021.

In 2022, cement production in the country is expected to increase by 12 percent due to the increasing demand for housing in rural areas. Furthermore, due to the pandemic, as many companies have allowed employees to work remotely, the need for housing has also increased in Tier 2 and Tier 3 cities, creating a vast market for cement suppliers.

Keep reading to know who are the top cement suppliers in India.

Who is a Cement Supplier?

A cement supplier can be a manufacturer, a wholesaler, or a distributor that provides cement directly to customers, i.e. an individual or another business.

In the case of a Business-to-Business (B2B) model, the manufacturer or the cement company directly supplies cement to the construction companies; hence the company itself is the supplier in this scenario.

India manufactured nearly 262 million tonnes of cement in the financial year 2021. Here are a few leaders of the cement industry that helped the country achieve such a tremendous outcome.

Established in 1983, UltraTech Cement is a flagship company of the Aditya Birla Group. Today it is the largest manufacturer of concrete cement, grey cement, and white cement in India, having a revenue of INR 45,449 crore and total equity of INR 44,174 crore.

Not limited to it, UltraTech has more than 100 Ready Mix Concrete (RMC) plants, 23 integrated plants, one clinkerization plant, seven bulk terminals, and 26 grinding units. Other than India, it also has plants across UAE, Bahrain and Sri Lanka.

Formerly known as Gujarat Ambuja Cement Ltd, the company clinkers cement for the home country and exports it to other countries. In 2006, Ambuja entered into a partnership with Holcim, the second-largest producer of cement in the world.

What makes Ambuja unique is it claims to manufacture cement that suits the climate condition of India. It is one of the leading cement suppliers in India, with a capacity to produce 31 million tonnes per annum.

Currently, it has six integrated cement manufacturing plants and eight cement grinding units across India. As of 2020, the revenue of Ambuja is INR 27,684 crore and a total equity of INR 23,680 crore, with Holcim having a holding of 61.62 percent.

The Associated Cement Companies Limited came into existence in 1936 as a result of one of the massive mergers in the history of the Indian cement industry. The industry witnessed the merging of 11 cement companies, which were,

It also has two grinding plants located in Maharashtra and Tamil Nadu, capable of producing 15.5 million tonnes of cement per annum. Additionally, it owns three, Sankar Super Power, Coromandel King, and Raasi Gold. The revenue earned by India cements in 2020 was INR 5228 crore, and the net income was INR 53 crore.

One of the largest suppliers in the Northern India region, Shree Cement, was India’s largest cement company by market capitalisation in 2018. In 2021, the revenue obtained by the company was INR 13,942 crore, and the total equity was INR 15,397 crore.

It can produce up to 44.4 million tonnes per annum, having plants in Rajasthan, Uttarakhand, Bihar, Haryana, Chhattisgarh, and Uttar Pradesh. Besides cement, it also manufactures power under the brand name Shree Power and Shree Mega Power, which is a Captive Power Plant and Independent Power Plant, respectively.

Overview of the Indian Cement Industry

India houses a total of 210 large cement plants and 350 mini plants, with the maximum number of plants located in Andhra Pradesh, Rajasthan, and Tamil Nadu. Due to the continuous increase in demand from the housing, commercial and industrial construction sector, India is on its way to producing 550 to 600 million tonnes per annum by 2025. It is also predicted that many foreign biggies would enter India’s cement sector, creating a hugely competitive environment. 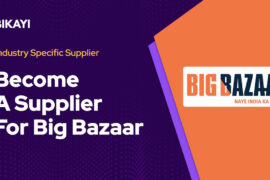 How To Become A Supplier For Big Bazaar in 2022